Blog Does Vaping Cause The Same Oral Health Problems As Cigarettes?

Does Vaping Cause The Same Oral Health Problems As Cigarettes? 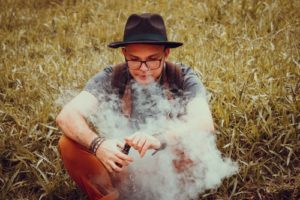 You might think that vaping is a safe alternative to smoking — and you wouldn’t be alone. Many former smokers, and even never-smokers, are turning to electronic cigarettes as a safer smoking option. But just how much safer is vaping than cigarettes? As it turns out, not much safer at all. Vaping poses some of the same health concerns as traditional tobacco, and, as your dentist in Buckhead knows, some similar oral health problems, too.

Believe it or not, vape pens or e-cigarettes debuted in the United States all the way back in 2007, but they seemed to pick up in popularity in recent years. Many people choose vaping over smoking cigarettes for a variety of reasons, such as:

However, research shows that vaping can result in similar health problems as smoking including, but not limited to, an increased risk of pneumonia, rapid heart rate, congestive heart failure, and stroke.

Similarly to the overall side effects of vaping, there are oral health dangers behind the use of e-cigarettes.

Dry mouth is one of the most common side effects of vaping. While this doesn’t seem like a very serious problem, it can actually cause more than simple discomfort. Vaping liquid contains an ingredient called propylene glycol, which is one of the most common ingredients found in vaping liquid. This ingredient can cause a mouth to dry out, resulting in bad breath. It can also damage tooth enamel which increases the likelihood of decay and gum disease, both of which will require early intervention from your dentist in Buckhead to treat successfully.

The list of dangerous ingredients doesn’t end with propylene glycol. The sweet flavor of many e-liquids can be attributed to something called vegetable glycerin. If there’s one ‘good’ thing about this vape ingredient is that researchers believe that it doesn’t cause cavities. However, if it’s mixed with flavoring, as it is with many e-liquids, it can erode enamel and make it easier for bacteria to stick to teeth. Without enamel and with a surplus of bacteria, the result is often cavities.

E-cigarettes contain nicotine, although usually not as much as cigarettes. This is one reason why many people try to use vaping as a way to quit smoking. But, nicotine has been well researched in the dental community and is known to negatively affect gum tissue and increase the risk of gum disease. If not treated quickly, gum disease can become irreversible and lead to tooth loss, as well as health problems such as heart disease.

Even though one of the main reasons people pick up a vape pen in the first place is to help them stop smoking, there’s no conclusive evidence that this strategy works. In fact, some studies show that vaping has the opposite effect and makes people less likely to quit. Instead of turning to the vape pen, try some proven ways to kick the habit once and for all. The American Lung Association is a great resource for smokers who want to quit. Keep in mind, quitting can be difficult, and not one tactic works for everyone. Don’t give up.

Your dentist in Buckhead is here to help keep you healthy, whether you smoke e-cigarettes, traditional cigarettes, or neither. The most important thing to remember is to get a dental checkup at least twice a year. These appointments allow your dental team to keep a close eye on your oral health and intervene quickly if problems arise.

Dr. Andrews and his staff are great. My Harton family have been patients for years. Dr Andrews goes above and beyond in patient care and is a skilled dentist.

I have been a patient of Dr. Andrews’ office for 35 years. Everyone in the office is professional, friendly, and top-notch. I have referred numerous friends to Dr. Andrews and everyone has been very pleased.

Dr. Andrews has a calm and caring manner. He builds rapport as does the staff. And he is exceptionally skilled in his profession. I have been to more than a few dentists over the years so I know Dr. Andrews is top-notch.

The entire staff is trustworthy, thorough, and caring. I have had some bad experiences in the past with other dental offices and know that I am in good hands here.

I’ve been going to Dr. Andrews for years. I have never had a bad experience. Honestly, my whole family goes here and we all love it. The entire team is highly professional, efficient, and kind. Highly Recommend!